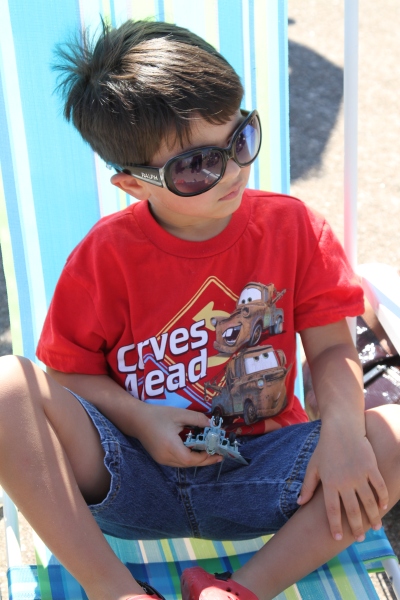 Long ago my now seven year old attended a Catholic preschool.  He began at age 18 months, and still couldn’t walk or talk.  A few weeks later he learned to walk, and we relaxed a little.

The next year a new teacher noted that Julian couldn’t sit still, wandered the perimeter of the room, and that he still wasn’t talking.  She suspected autism, I would learn later on, but she never shared this with me.

I had my own inklings that he was more delayed than he should be, so I brought it up with his pediatrician, even asked if my son could possibly be autistic (Jenny McCarthy was making the rounds back then, scaring the hell out of all of us).  His pediatrician said to me, emphatically, “I’ve never thought Julian was autistic.”

Ahhhhh….  Just what I wanted to hear.

The following year, when Julian was three and a half, the school finally shared their concerns with me during a meeting involving not only his teacher but the school director.  I knew something terrible was on its way, even before the words were spoken, “No parent wants to hear that her child isn’t perfect.”

His teacher at the time was the “only one with enough heart to take him.”  Was it that bad?  It was that bad.  The teacher even approached me one morning not long after the big meeting, held both my hands, looked deep into my eyes and said, “I joined a prayer group to help me get through this.  It’s going to be a tough year.”

Without a doubt she was (using a Jesus-loves-me-this-I-know tactic) begging me to withdraw my son.

I immediately pulled him out of the school, got the diagnosis of autism, and enrolled him in a school that really wanted him, The Westview School.  He thrived there for the next three and a half years.

This school year we transitioned him to an inclusion program at the Catholic school just across the street from his old preschool.  My nine year old daughter attends this same school, so the idea was to have our children together, which is as it should be.  Or so I thought.

Not long after the school year began, I watched as the old preschool was demolished, its mottled red bricks crumbling, thick dust and jagged debris littering the ground.  It felt good to watch the past turn to dust.

In its place a large expensive religious education center was scheduled to be built, and progress has been swift.  Already there are heavy steel beams in place, an emerging shape.  Just last week, as I watched men in yellow hardhats adding to the structure, I thought, We’re building over the rubble.  We’re rebuilding.  We’re hauling away the trash, the past.  We’re building up, building higher, building better.  Braver.

A few hours later I received an email from one of my son’s teachers across the street.  Things weren’t going so well.

All I could think was No, not again — the not knowing, the anxious tightrope walk, the dull ache in the pit of my stomach when I kiss my son goodbye in the morning, then all afternoon and as I pick him up from school, when I go to sleep at night (IF I can sleep) and when I wake the next morning.  Please, not again.

It seems that just when we’re flying so happily high, that fat monster of helplessness pulls us back down to his level.  Helplessness is heavy, huge.  He wraps himself around our world and squeezes.  Hard.

He’s like an enormous inflamed cyst, a puss-filled wrap-around mass.  When in his grips, I can’t breathe or move.  I can’t see over his fat massive head and shoulders.

And his skin?  It’s slick and brownish gray, shiny like a slug from the bottom of the blackest sea.

This is who we’re keeping company with these days, the slug of helplessness, a slimy sea monster from the deep depths of despair.  He sleeps with me, sits in the passenger seat of my car, whispers worries in my ear. The septic water in his lungs gurgles when he speaks, the voice of rot.  If I forget he’s there, he squeezes me tighter, a swift painful reminder.

Of course I’m doing all the things we autism moms know to do.  I’m making calls, getting new assessments and advice from my son’s doctors, making appointments, implementing emergency interventions like alcohol (for me, not the kid).  We keep moving, despite the pressure from the monster of not knowing, the monster that says not to move, that it’s no use.  Just give up, I’ve got you, he says.

But I’m moving anyway, helping the situation, I hope, despite the monster.  I’m shooting some blanks, I know, but eventually I’ll put a real bullet in the slug’s slimy skull.  Eventually, this will happen.  I’ll fill holes, find answers, apply a few temporary BandAids and voila!  We’ll send helplessness packing.  For a while at least.

This happens all the time to parents like us.  I know this.  And it actually helps knowing we’re not alone.  But the pain is still quite the monster.  We’re thrown back to not knowing our son the way we thought we knew him, like just after the original diagnosis.  But he’d been fitting in, right?  He was doing okay.  He could handle this.  They could handle him.  We were on the right path.  This was all true, right?

Maybe.  Maybe everything was okay but now it’s not.  Or maybe it never was okay.  Maybe the kid was just barely coping, hiding his discomfort somehow with what language he had, what coping skills he had, what pride he had and the vague awareness that he was making his parents and new school happy.  But everybody breaks under enough pressure.  Julian held it in for as long as he could and now, he’s in crisis.

We don’t know the things we thought we knew.  And I’m so tired of not knowing, of not being able to just flipping know my child has found a home where we all can feel at home.  A home not so far from home, where his sister is, where our church parish is, where “normal” lives.

We just want to be home.

The big recurring message is the obvious:  Your son has autism.  It’s quite apparent, no matter how often you like to forget it, the worst of it.  And I’m sorry about this.  It is what it is, a fat monster which will never, ever, completely go away.  You can’t always control or predict its behaviors.  You can’t always medicate the beast.  No matter how long the reprieve, it’s never long enough.  You’ll get a call or an email:  The beast is back.

A few weeks from now I’ll have the answers I need, preferably sooner.  I’ll know whether or not my son should be withdrawn from the very large school that had all the right intentions.  I’ll know what our next educational move is.  I’ll hopefully be resting better at night, and my son will be too.

But the fat monster will always be lurking.  He’s always just a phone call or email away.

“Ms. Cortez?” says the demure voice of Sister Christopher, and I’m right to fear what comes next.